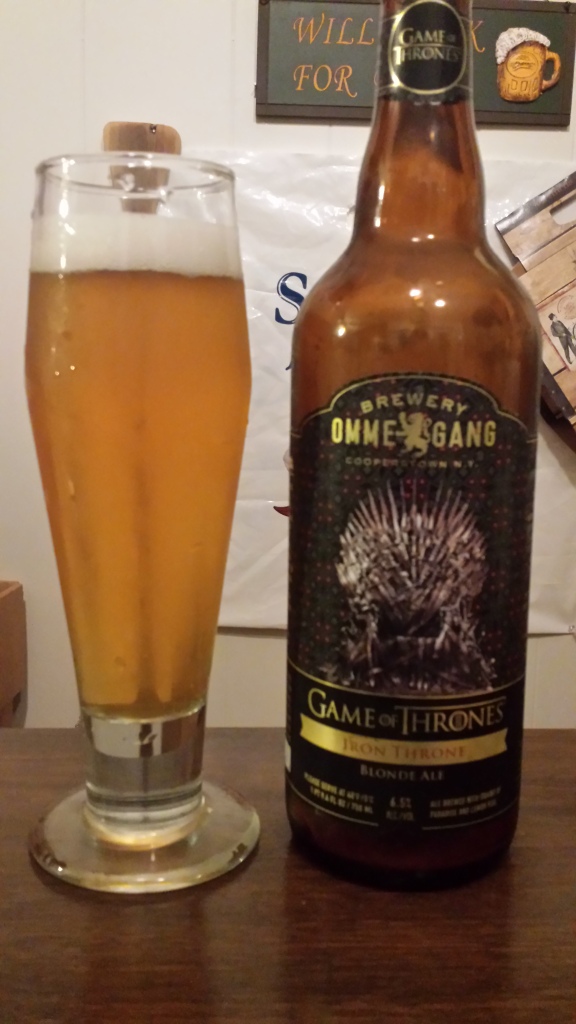 This week’s edition of The Beer List marks the return of The No Seatbelt Blog to its regularly-scheduled programming after a week-long hiatus, as the hustle and bustle of work, school and wedding planning consumed my free time and sanity. However, I’m back in action with another beer review, and this time Ommegang’s Iron Throne from its popular Game of Thrones-themed series of limited-run brews.

I first had the Iron Throne, which is a blonde ale, at a fancy-dan restaurant called Circa, located in High Bridge, New Jersey, and on that same night, I had rabbit and wild boar meatballs for the first time. I definitely liked it the first time I had it, but I picked up a couple bottles of it at my local liquor store last week to refresh my memory. At only eight bucks and change for the large bottle, it was a steal.

Iron Throne, according to Ommegang Brewing’s official website, was the first of the series to be released. I’m here to tell you that it was an excellent start for the Cooperstown, New York brewer in its partnership with HBO. Golden and transparent on the pour, the blonde ale had a fairly high carbonation level, and the head was quite noticeable and took a while to dissipate. There is a lot of complexity to this beer, as four different malts, two types of hops, and spices such as lemon peel and “grains of paradise” are employed in the brewing process. For me, the smell was of lemon, which was also present in the taste, and balanced out by some spice (which I always like when paired with citrus), a fair amount of malty force, and just some slight bitterness from the hops.

With only a 6.5 percent alcohol-by-volume, Iron Throne is very drinkable, but at the same time, this beer should enjoyed slowly to experience the delicious flavor profile. I have had three of the beers from the Game of Thrones series so far, and for me, they have been sufficient proof that Ommegang is a masterful brewery. Iron Throne can still be found on tap at select locations, and in corked 750 milliliter bottles.

You can check out my review of the Game of Thrones Valar Morghulis, an incredible Belgian dubbel ale here.  It’s good to be back this week, and the words will keep flowing in the coming weeks, covering beer, movies, music, toys, and much more! Thanks for reading, and stay tuned!