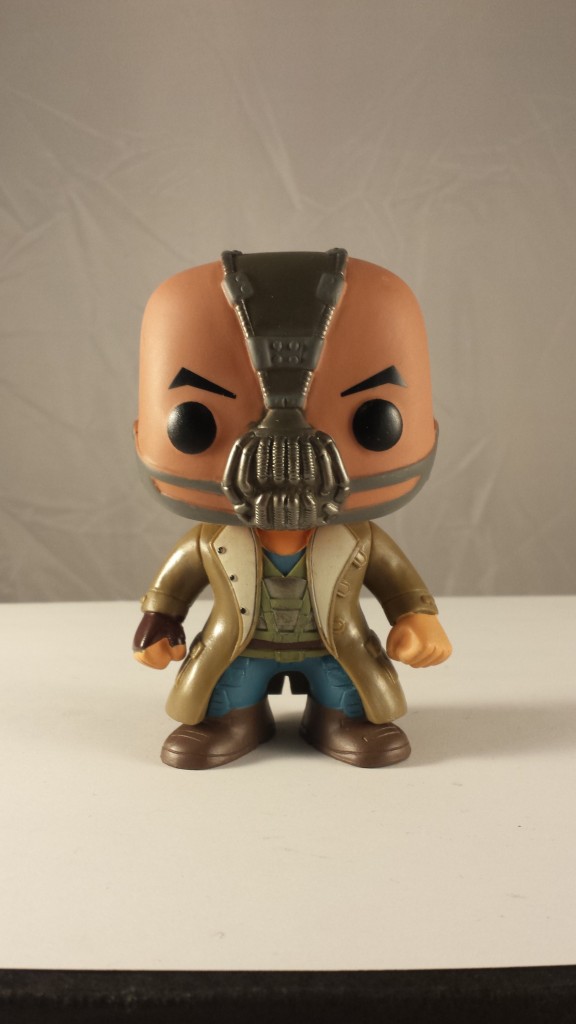 I picked up this Funko Pop! Doll that resembles the marble-mouthed villain from The Dark Knight Rises in a shop on the boardwalk in either Ocean City or Wildwood, New Jersey. I got him for about ten bucks, and not long after that, Funko discontinued it, sending its value skywards. I’ve seen him going for as much as $230 on Ebay and Amazon. I’ve been tempted to sell him, but I think I’ll hold onto him for a few more years or until someone gives me an answer I can’t refuse. For toy collectors, the Funko train is a great one to be on, since the Pop! dolls are very inexpensive, and when they are retired, their sale value often goes through the roof, assuming you can overcome whatever sentimental value is attached to the character.

When the extended Dark Knight Rises trailer was put at the front of Mission Impossible: Ghost Protocol, the movie-going populace was livid as it struggled to understand even a single word that came out of Bane’s (Tom Hardy) masked mouth during the 8-minute scene. Luckily, before the movie came out, his voice was remastered and clarified to make it somewhat more understandable. It was a bit strange, though, that in the original Batman comics and cartoons, Bane was a Spanish boxer, but for the movie was basically a British mercenary. We were all spoiled by Heath Ledger’s portrayal of The Joker in The Dark Knight, so Bane wasn’t everybody’s favorite baddie from Christopher Nolan’s trilogy, but I enjoyed his voice (once it was clearer) and I can’t say I didn’t squeal with joy when he blew up a Gotham football field while the game was going on. He hailed himself as “Gotham’s reckoning”, and he sure beat the hell out of Batman before getting blown to bits by Catwoman.

The Bane Pop! doll is one part of the Dark Knight series that Funko put out, which also includes Batman, The Joker, The Joker Thug, and Catwoman. I collected the entire series quickly, and may feature the other characters on future editions of Funko Friday. Last week’s edition of the series featured Groot from Marvel’s Guardians of the Galaxy. You can check it out here, and stay tuned for new entries every Friday!

One thought on “Funko Friday: Bane”