In honor of one of everyone’s favorite characters from The Walking Dead, this brand-new edition of “Funko Friday” here at The No Seatbelt Blog is dedicated to none other than Abraham Ford, the red-headed military man who END_OF_DOCUMENT_TOKEN_TO_BE_REPLACED

This week on Funko Friday, I’m finally welcoming my very first Deadpool figure into my varied collection of Funko’s Pop! dolls. I’ll be honest if it weren’t for my nerdy compadre Cory, who is a Deadpool superfan, I would likely have been oblivious to the character’s existence until the movie came out. And what a movie that was. Played PERFECTLY by Ryan Reynolds, the “merc-with-a-mouth” slayed audiences, myself happily included, with a full-throttle ride full of blood, guts, unbridled profanity, and even a mushy love story. Reynolds proclaimed that he waited over ten years to make this movie, and just to prove a point to that end, reportedly stole the character’s trademark suit from the set. END_OF_DOCUMENT_TOKEN_TO_BE_REPLACED

Honestly, who doesn’t love Tony Stark? Played by the incredible Robert Downey Jr. in the Marvel Cinematic Universe, Stark is a brilliant, charismatic, and borderline alcoholic scientist and weapons guru who after being kidnapped by mercenaries out in the desert, has his heart removed and replaced with an energy source, builds a mechanical suit that enables him to fly, shoot lasers from his hands, and protects him from much damage. Once rescued and brought back to America, he’s approached by Nick Fury, who convinces him to join the Avengers Initiative, a program which assembles a team of assorted superheroes that come together to save the world when evil strikes. END_OF_DOCUMENT_TOKEN_TO_BE_REPLACED 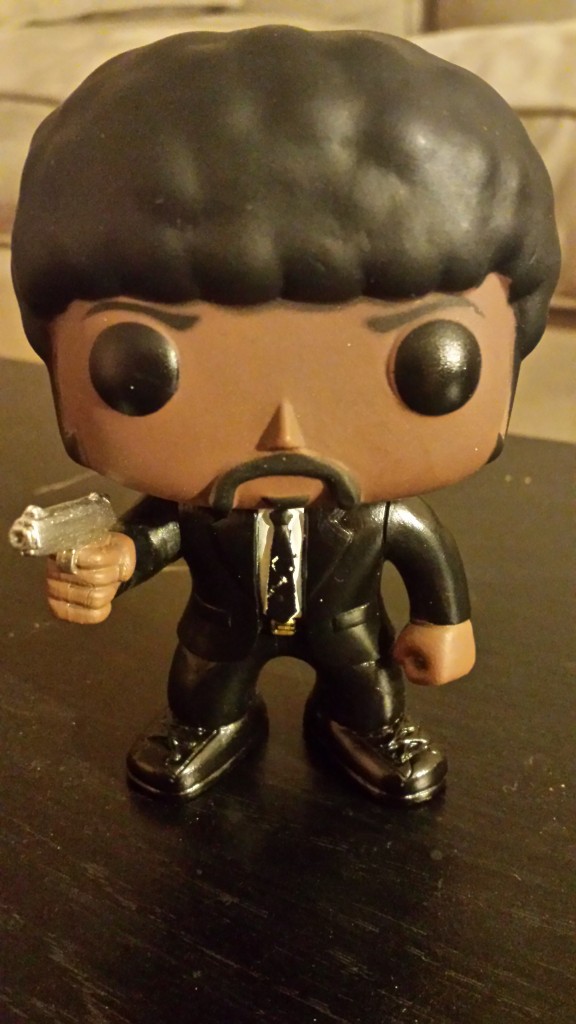 Another week is coming to a close, and if you’re a toy collector, or just a nerd, what better way to kick it off than with another Funko Friday entry here at The No Seatbelt Blog? This week, we’re reaching for the classic that is Pulp Fiction once again, as Vincent Vega’s partner in bloody crime, Jules stands front and center to curse at you, pump you full of bullets and then abruptly change his ways after he witnesses what he believes to be a miracle.  END_OF_DOCUMENT_TOKEN_TO_BE_REPLACED

It’s Friday night, and here at The No Seatbelt Blog, I celebrate it by writing about toys. Because that’s what nerds do. Every week, I showcase another piece of my collection of Funko’s Pop! vinyl figures, offering some background on the featured character, its origin, and significance to me. Funko has won a piece of my nerdy heart with this line of compact, inexpensive, big-headed collectibles, and my collection of them has grown exponentially over the last few years. END_OF_DOCUMENT_TOKEN_TO_BE_REPLACED 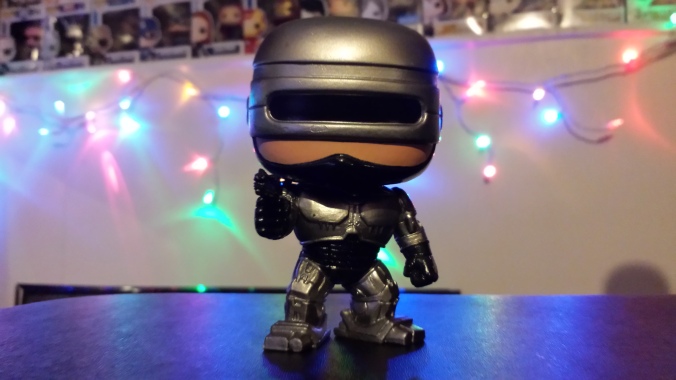 It’s Friday night, and I’m kicking off the weekend with another entry in my weekly toy series, Funko Friday, as I batten down the hatches for the impending blizzard. Tonight, I have chosen Funko’s Pop! vinyl version of Robocop as my subject. The namesake of the obscenely violent 1987 action movie, Robocop was formerly known as Officer Alex J. Murphy, who was shot to pieces by a group of criminals, only to return to the force, half-man, half-machine, to take out the trash on the streets of crime-ridden Detroit.  END_OF_DOCUMENT_TOKEN_TO_BE_REPLACED

This week, I present another edition of Funko Friday, showcasing none other than the popular toy company’s version of “the heart of the Ghostbusters,” Dr. Raymond Stantz. Played with a signature “aww, shucks” charm by Dan Aykroyd in both movies of the franchise, Ray Stantz was a thoroughly lovable character. Built with equal parts childlike wonder and real world smarts, poor Ray was conned by his partner Pete Venkman into selling the house his parents left him so that the future foursome of paranormal investigators and eliminators could purchase a dilapidated firehouse where they would store the supernatural baddies they snared. END_OF_DOCUMENT_TOKEN_TO_BE_REPLACED 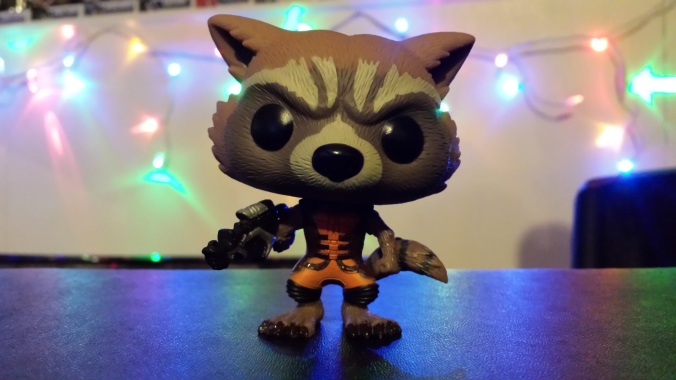 This week on Funko Friday, everyone’s second favorite character (arguably) from Marvel’s blockbuster Guardians of the Galaxy, Rocket Raccoon takes the stage! Rocket, featured in the Guardians of the Galaxy comic book series, is a galactic warrior who in his current state was born of genetic experimentation that granted him superior intelligence, and the ability to walk on two legs. He was also given a raging attitude and hangs out with a mutated tree named Groot. And this, my friends, is how intergalactic fiction can be great.

In the movie that nobody saw coming, and that nobody expected to do as well as it did, Rocket, the pint-sized mammal with a mouth was voiced by Bradley Cooper. If you didn’t know any better, you’d never guess that it was Cooper, as Rocket’s gruff, gravelly intonation was most certainly a put-on for the actor. I can’t imagine it was anything short of a blast to do, however. Rocket will be returning to the big screen to get into more trouble with his merry band of misfits for Guardians of the Galaxy Vol. 2 in 2017.

Peter Quill: I can’t believe I got taken down by a raccoon

Peter Quill: You are! I’ve seen many of them, like you, on Earth!

I picked up the Rocket Raccoon vinyl Pop! doll from Funko at Hot Topic a while back, as the store’s combination of selection of the collectibles and “buy one, get one half-off” sales is, well, just goddamn irresistible. This model of Rocket is depicted as he appears throughout most of the movie, in his orange body suit, gripping his weapon of choice. Let’s not forget the menacing stare – he may look diminutive, but he’s fierce. Look at him, he’s about to kick your ass. The Rocket Pop! is also one of the select few that features a bobble-head! Funko’s line of Pop! dolls also consists of Star-Lord (masked and un-masked), Gamora, Drax, several versions of Groot, Ronan, Nebula, Yondu, Thanos, and The Collector!

This has been another edition of Funko Friday here at The No Seatbelt Blog. Past and future installments of this series can be found under “The Toy Chest” section on my website. Check out all the other blogs that I write on movies, music, beer, toys, and more, every week! Until next time, keep calm and collect on! 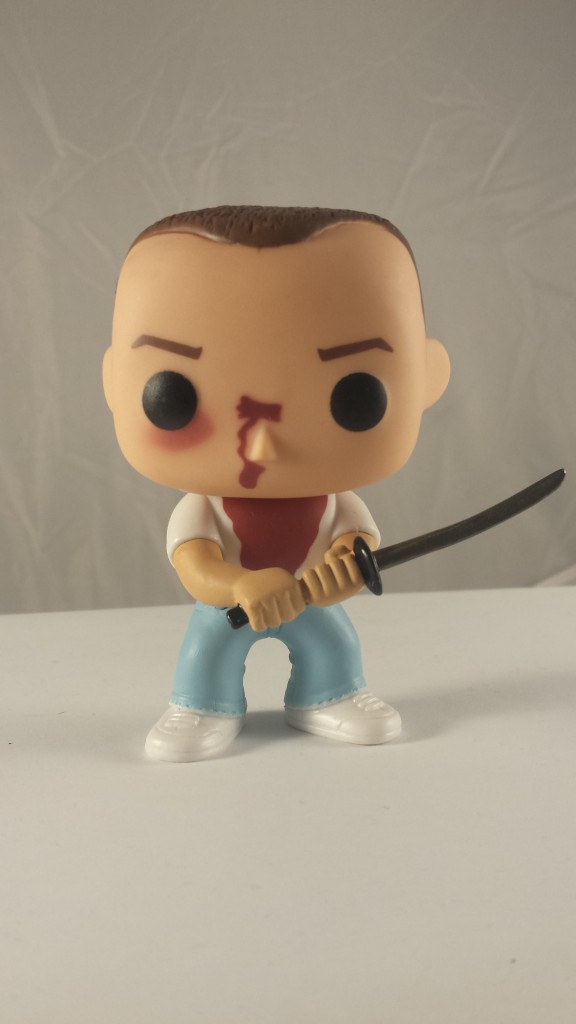 My collection of Funko’s Pop! vinyl dolls has grown significantly over the past couple of weeks, and the latest addition to my burgeoning trove of these addictive collectibles is none other than Butch Coolidge, the character made famous by Bruce Willis in Quentin Tarantino’s masterpiece, Pulp Fiction. If you want just a glimpse of Butch’s trials in this most brilliant film, he spends his time beating an opponent to death in a boxing ring, evading and eventually attempting to run down his former ally Marcellus Wallace, berating his well-meaning girlfriend about forgetting to bring along his father’s prized watch before they try to make their escape, and having a climactic run-in with Marcellus’ henchman Vincent Vega, played by John Travolta in one of his greatest roles. END_OF_DOCUMENT_TOKEN_TO_BE_REPLACED

Merry Christmas, my dear readers! On this special day, “7 Days of Christmas” comes to a close here at The No Seatbelt Blog with a new edition of Funko Friday. This time around, I showcase the two newest additions to my collection of Funko’s Pop! vinyl dolls, Clark Griswold and Cousin Eddie from National Lampoon’s Christmas Vacation! I was beyond excited when the toy company released figures of these two lovable characters from my favorite Christmas movie, and of course, I had to get them.  END_OF_DOCUMENT_TOKEN_TO_BE_REPLACED