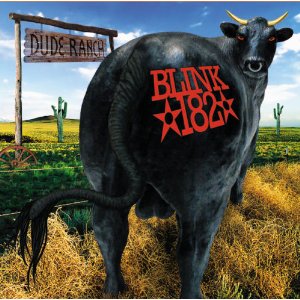 In honor of this week’s much-anticipated release of Star Wars: The Force Awakens,  which is the seventh volume of every nerd’s favorite cinematic saga, The No Seatbelt Blog will remain in kind, by presenting a most appropriate song for this newest edition of “Growing Up 90’s.” From Blink-182’s seminal 1997 pop-punk album Dude Ranch came “A New Hope,” a deep track on the record about a pubescent obsession with Princess Leia. The band’s Mark Hoppus leads the listener through his fantasy about falling asleep and waking up next to the heroine from those legendary first three films.

The song is loaded with references to “the Holy Trilogy,” as Hoppus name-drops Han Solo, Alderaanians, the moons of Endor, the cantina on Mos Eisley, the deserts of Tatooine, and even throws in a more-than-vaguely racist line about “drinking Colt 45’s with Lando.” “A New Hope” is three minutes and forty-five seconds of fast and loud pop-punk glory (quite a long runtime when compared to most of the other songs on that album) with quite amusing subject matter.

Dude Ranch was and is one of the most important albums to me, loaded with lyrics about the pains of teenage heartbreak and longing, while balanced out with plenty of immature jokes. While I was never the biggest Star Wars fan, I nonetheless appreciate those original movies, and Blink-182’s song still makes me chuckle as I listen through its charming and funny name-drops.

“Princess Leia, where are you tonight?

And who’s laying there by your side?

Every night, I fall asleep with you, and I wake  up alone…”

This wraps up another edition of “Growing Up 90’s.” Stay tuned for more on some of my favorite songs from the decade that ushered me through most of my formative years, every week from now until whenever, right here at The No Seatbelt Blog!