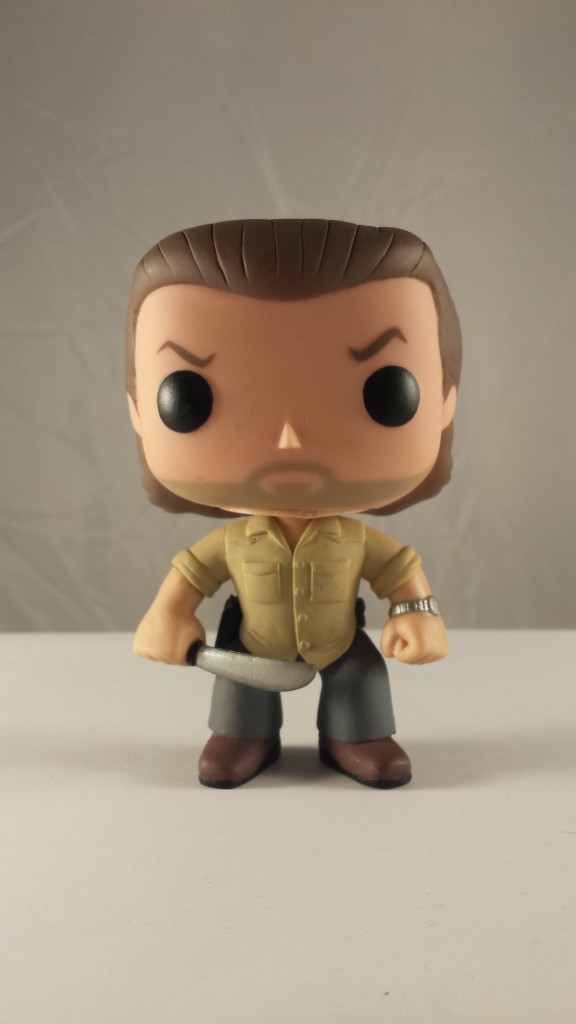 In honor of the upcoming return of The Walking Dead, this week’s edition of Funko Friday presents the Prison Yard Rick Grimes Pop! doll! Everybody who has watched the show from the beginning remembers when Rick and the crew were just about to stumble upon the prison, as the fearless leader ushered in “the Ricktatorship” with his “this is not a democracy anymore” speech. From there, he grew his hair out, became a farmer, and completely lost his shit and started hallucinating and  seeing his dead wife (man, she was annoying when she was alive). It was a weird time for Rick on the show, as he quickly descended from awesomeness (see: Ricktatorship) to a quivering, emotional pile of goo incapable of leading anyone.

The Pop! doll crafted in his likeness features his long, slicked back hair, the beard, and his permanently crazed expression, along his his trusty machete. There are several versions of the Rick Grimes Pop! from Funko, including the original, which depicts him in his sheriff’s uniform, and a variant of it splattered in blood. Since The Walking Dead is so wildly popular, Funko released a fairly extensive line of characters, and special variants for many of them, including everyone’s favorite character Daryl Dixon, his brother Merle, the Governor, Michonne, Glenn and Maggie, Herschel Greene (with a headless version!), a collection of different walkers depicted on the show, and more. This was a great property for Funko to capitalize on, and allowed for a large line of collectibles that are enjoyed by so many. Catch the new season of the show as it airs this Sunday night on AMC, and come back to The No Seatbelt Blog next Friday (and every Friday) for another installment of this series on these fun and highly collectible toys. See you then!