Another five emotional rock ballads are being served up to you this week, with more coming next Tuesday!

A power ballad list would never be complete without New Jersey’s favorite prom song (it even references the prom) from Bon Jovi’s breakthrough record, Slippery When Wet. The song’s musical structure is emotionally gripping, and its lyrics pine for days gone by, youthful hijinx, and the retention of those memories. This is one of those songs that makes me miss when Bon Jovi was great, as well as those relatively carefree days of my own youth.

The biggest hit from Heart, led by sisters Ann and Nancy Wilson, “Alone” was written by two other musicians and sold to the band. The song was placed on Heart’s 1987 release Bad Animals, which was a driving force behind the band’s significant comeback during the 1980’s. The tune starts off with a piano line and includes the soft verses, and bombastic choruses that are used to craft any great power ballad, all topped off with powerhouse vocals from Ann Wilson. Side note: Celine Dion recorded a cover of the song for her 2007 album Taking Chances.

This power ballad from the legendary British rock band was originally intended to be on their record Adrenalize, but ended up being shelved until 1995 when it appeared on Vault, their greatest hits release. The song is characterized by subdued verses, impassioned vocals from lead singer Joe Elliot, with backing vocals from guitarists Phil Collen and Vivian Campbell, as well as from bassist Rick Savage. The tune is also laden with orchestration, which is funny when you think about the band’s song “Let’s Get Rocked” in which Elliot openly mocks violins.

Bad Company- “If You Needed Somebody”

From the British classic rock supergroup that brought us hits like “Shooting Star”, “Feel Like Makin’ Love”, “Rock and Roll Fantasy”, and, uh, “Bad Company”, comes a great power ballad from their 1990 effort Holy Water. The song features some inviting guitar plucking during the verses, and powerful catchy choruses. I first heard this song a few months back courtesy of the “Hair Bands” station on Pandora Radio, and immediately liked it. Great, but little-known song from an iconic hard rock band.

Whitesnake- “The Deeper The Love” 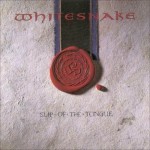 I had been compiling and posting this list of power ballads for over a month when I suddenly realized that it was devoid of any Whitesnake songs, so I started thinking about it, and ended up having some anxiety over it. I’ve seen “Here I Go Again” pop up on power ballad countdown lists, but the faster tempo of that song makes it more of a straightforward rocker to me, and while “Is This Love?” certainly fits the bill, I just don’t like it enough to put it on here. Then, I thought about “The Deeper The Love,” and subsequently consulted my friend and podcastmate Chris (you can find his weekly podcast at chrisaballo.com) on my Whitesnake dilemma, and he suggested the song as well. Showing up on the band’s 1989 album Slip of the Tongue, this well-crafted power ballad features an awesome solo by legendary guitarist Steve Vai, who was in the band at the time. The music video for the song is one of several from the band that has lead singer David Coverdale’s then wife Tawny Kitaen writing around for the camera.

Stay tuned for Volume 7, which will be the final installment on the classic rock side, and the following week we’ll end it all with a set of modern-day power ballads!