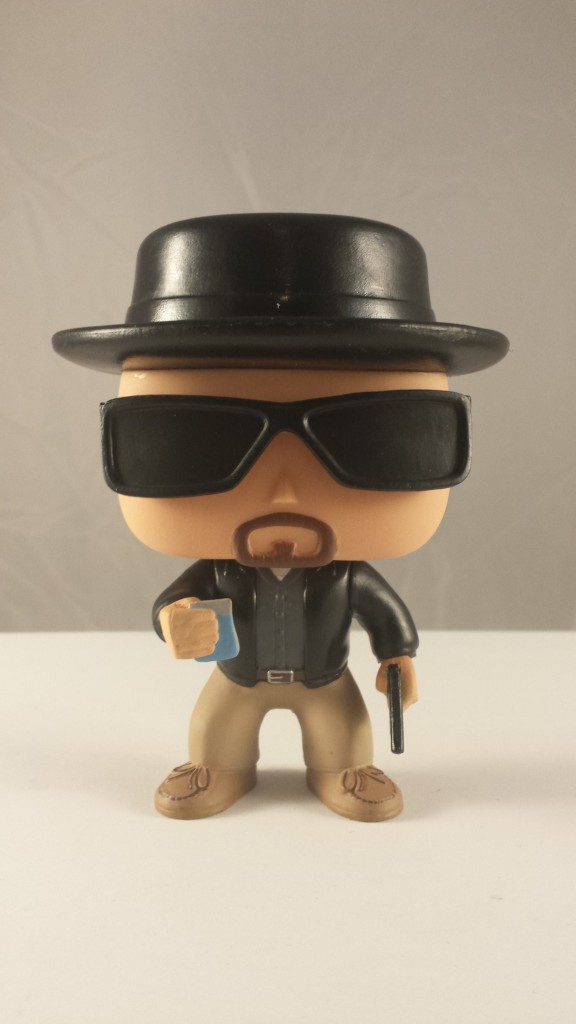 I don’t mind telling you, it’s awesome to have a toy that immortalizes that time the dad from Malcolm In The Middle got terminal cancer and decided to start cooking and selling crystal meth with one of his former students so that he could provide for his family after he was gone. Who knew he’d become the most dangerous drug kingpin in the Southwestern U.S.?

This Heisenberg Pop! is one of several of Bryan Cranston’s character that Funko created for its Breaking Bad line, the rest of which I’ve yet to collect. You can see in this Pop! that the character had gone full badass, carrying a gun and a beaker filled with the chemicals used to make the “blue crystal” meth for which he had become famous. The role of Walter White/Heisenberg is undoubtedly one of the highlights of Bryan Cranston’s career, and Breaking Bad was one of the most addictive (for lack of a better word) shows to ever be on television. There is a full line of Breaking Bad Pop! dolls out there, including several versions of both Walter White and Jesse Pinkman, as well as Hank, Gus Fring, Saul Goodman, and more. What amazes me about Funko’s Pop! dolls is the way the company truly creates an unmistakable likeness for all its characters, and still maintaining such a small and simplistic design.

To quote one of the most unforgettable moments from the show and all its five seasons, as Heisenberg meets up with another drug dealer in the desert and tosses a bag of meth on the ground between them…

Take a look at the first week of my Funko Friday series, starting with Egon Spengler from the Ghostbusters here! Come back next Friday for a new edition of this continuing series!

One thought on “Funko Friday: Walter White, a.k.a. “Heisenberg””