Since the trailer for next year’s Suicide Squad movie has been released, having magnified the uproar following the casting and look of Jared Leto as The Joker, I have decided to examine the evolution of the character in movies in anticipation of the upcoming film. Follow me, Batman fans!

Nobody can argue with the legendary career of Jack Nicholson, and his role as The Joker in the 1989 Batman film, opposite Michael Keaton, is one of its many bright spots. As an 80’s baby, I loved the movie, and his portrayal of the famous villain. I was only 5 years old when the movie was released, and even then, I don’t remember his character being all that scary, which is probably why I liked it. Sure, he killed people in the movie, but aside from that and the creepy laugh, he mostly just seemed goofy to me. That’s not a shot against his performance, it was a great template for future actors to tackle the role. For me, he was the right Joker at the right time.

I still remember the day that my former college roommate Dave called me up to tell me that Heath Ledger had died. I was in a supermarket, and my jaw dropped open in disbelief. This was months before his overwhelmingly praised turn as The Joker was to hit theaters in the summer of 2008. In The Dark Knight, the middle film of Christopher Nolan’s Dark Knight trilogy, Ledger’s Joker was deranged, psychotic, and even scary. His mannerisms, the perfectly bone-chilling cackle, and his general lack of motive for his citywide crime spree other than to give Gotham “a better class of criminal” made him thoroughly frightening. At one point in the movie, he explains to a badly injured Harvey Dent (Aaron Eckhart) in the hospital, not long after he killed Dent’s girlfriend that “I just DO things”, and that he’s an “agent of chaos”. Ledger was brilliant in this film, and he posthumously (and rightfully) received the Academy Award for Best Supporting Actor for his incredible performance in the role. 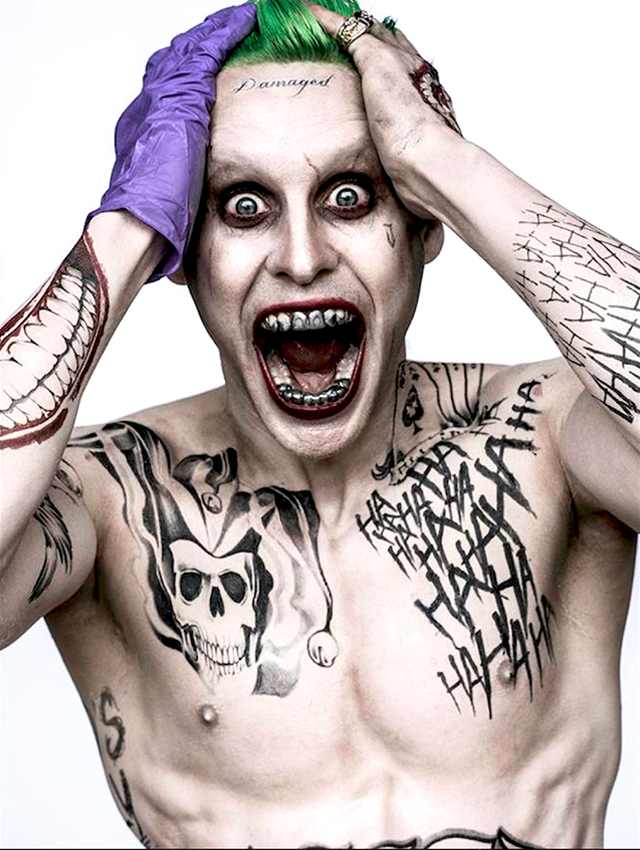 Jared Leto, who pulls double duty as an Academy Award-winning actor, and the frontman of “space rock” (as I like to call them) band Thirty Seconds to Mars, will be putting his own spin on The Joker next year in Suicide Squad. When the first picture of his character was released to the public earlier this summer, fanboys and comic book geeks alike erupted in a fit of seething rage, pointing out every little thing that they deemed to be wrong with his look. Whether it’s the tattoos that cover his shirtless body in the original photo (many of which simply read “HAHAHA”) or the grill that replaces many of his teeth, it was just all wrong. While the tattoos are admittedly a bit silly, I doubt he’ll be sans upper body clothing for most of his screen time, so everyone should stop worrying so much. Overall, I think he looks awesome, and that first still photo, pictured above, leads us to believe that he is going to be batshit crazy, which is exactly what everyone should come to expect from The Joker. When he’s introduced at the end of the trailer, he says to someone he has strapped down to a table, “oh, I’m not gonna kill you. I’m just gonna hurt you, really, really bad”. That line is eerily reminiscent of Jack Nicholson’s “gimme the bat, Wendy” episode in the horror classic The Shining. It seems obvious to me that he’s channeling Nicholson here, perhaps paying homage to a Joker that came long before him. Leto is an extremely talented actor, and if you’ve ever seen films such as Dallas Buyer’s Club, just to name one, you know that he gets lost in his roles, and you should have full faith, as I do, that he’ll pull this off.

3 thoughts on “The Joker: The Evolution of a Madman”