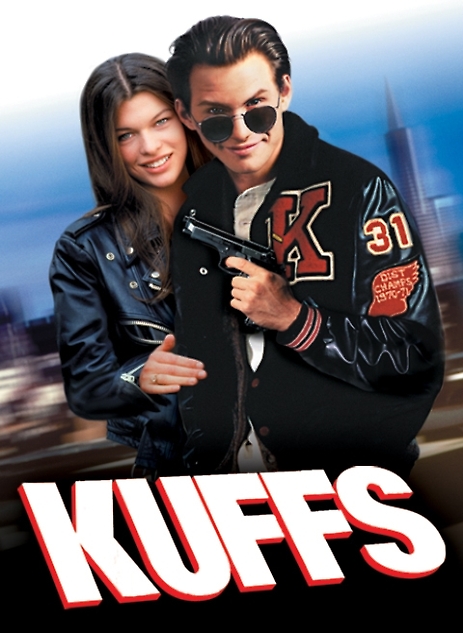 In 1992, one of my favorite, little-known “buddy cop” movies was released, and it keeps me laughing to this day. Christian Slater plays the title character, George Kuffs, an immature, n’er-do-well screw-up who just got his girlfriend pregnant and is trying to squeeze his older brother for money so he can hit the South American gold rush that he insists is going on. His girlfriend is portrayed by a very young Milla Jovovich, and when I say young, I mean she was 15 during the filming. His brother Brad, (Bruce Boxleitner) is a “patrol special” in San Francisco, where there is no official police force and store owners pay  law enforcement officers for protection in their given district. Of course, there is lots of badness going on in the streets- stores are being vandalized, shop owners are being threatened and extorted by thugs, and the people in Brad’s district are losing faith in him. Brad is offered a bribe by a criminal by the name of Kane, who asks him to look the other way while he and his cohorts tear up the town.

When Brad refuses, Kane murders him…in a church…on his birthday. George runs into the church, just missing the gunshots, but getting an eye on who did it. After his brother is declared dead, George finds out that his patrol special district was left to him. While pondering what to do about it, he is approached by an art dealer named Sam Jones, who offers to buy the district with a large sum up front and a residual payment for years after. He decides to honor his brother and takes over the district himself, goes through the police academy and goes gunning for Kane. At one point, Kane breaks into George’s apartment and offers him the same bribe he did his brother, which he accepts and then quickly renegs on.

Hilarity ensues, as in true buddy cop movie fashion, George drags his reluctant partner Ted (Tony Goldwyn) into his lonestar mission. Much of the comedy in the movie lies in Slater’s sarcastic snickering, and his frequent breaking of the fourth wall, explaining everything to the audience in brief asides. One truly funny moment lies in an argument between George and Ted while following a suspect, in which Ted drops a rash of F-bombs, all of which are bleeped out with sound effects, until the last one, which is left uncensored, to cleverly sneak it in and still keep the PG-13 rating. The duo eventually find out that Sam Jones is not the upstanding, well-known art dealer that he seems to be, and that he is trafficking stolen art and is in league with Kane and his crew of baddies. Kuffs has a final showdown in his own apartment with Kane, just before Maya (Jovovich) and her parents show up for dinner, and Jones decides that he needs to be stopped. He shows up at the patrol special office with George’s high school transcript, revealing that he never graduated high school. George is then arrested for fraud, and for the sake of moving the plot along, he escapes under the guise of a last-minute bathroom break. George and Ted stock up on guns for one final shootout with Jones and his henchman, bringing the story to an end. Slater and Goldwyn have great chemistry as partners, and the scenes that they are both in are some of the film’s best. Slater, who is unfortunately more well-known for his off-screen antics and issues with substance abuse, is very funny in this film. His charisma and comedic chops made him perfect for the role, so much so that the script was written with him in mind. Don’t think too hard about the plot- it’s not brilliant, and many of the devices used are wildly unrealistic, but all-in-all, the movie is just plain fun. The “buddy cop” theme is utilized in full effect here, with one partner being completely disrespectful of the chain of command, and having no noticeable fear of injury or death, going for the bad guys himself, and the other being more sensible, more reluctant, and constantly trying to reel the wild one back in. Kuffs is a genuinely entertaining movie, loaded with laughs and action, and is certainly a hidden gem.