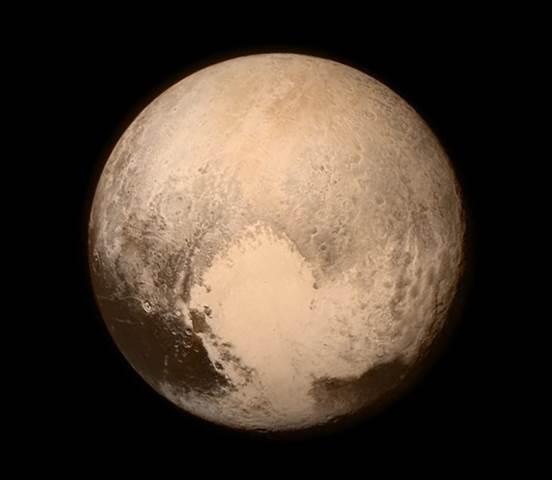 On Tuesday, the New Horizons spacecraft flew close by Pluto, a whopping nine years after it left Earth. As a kid, I was obsessed with the planets, stars, and the solar system at large, so my inner 9-year-old is beyond excited about this. I think I’m in good company when I say that when just after the New Horizons mission launched in 2006, the International Astronomical Union decided that Pluto was no longer a major planet, but rather a dwarf, my childhood was rocked. The decision was made based on Pluto’s size and mass, which was more accurately calculated upon discovery of the former planet’s moon Charon, as well as that of Eris, another far more massive object found beyond Pluto’s orbit. It was then decided that Pluto was a dwarf planet- just another object in the Kuiper Belt, a region loaded with icy, rocky celestial bodies extending out from the orbit of Neptune.

Yesterday morning, we received here on Earth an image of Pluto (pictured above), in striking detail that we’ve never before seen. While the images have started to transmit back to our planet, scientists involved in the mission have estimated that it will take a full 18 months for the New Horizons craft to send back all of the data that it is set to capture. It is a small miracle that the spacecraft, which is about the size of a grand piano, has survived for nine-and-a-half years in the dangerous, unpredictable, and limitless expanse of space to complete its mission. The craft traveled three billion miles to a body that takes nearly 250 years to orbit the sun, and made it there intact. NASA officials have begun to name regions of the planet detailed in the images, coming up with names such as “Cthulhu” and “Balrog”, labeled after terrifying mythical beings. I congratulate the New Horizons team for making history, and for bestowing upon the world more proof of the amazing things that mankind is capable of. I know that I will be eagerly awaiting every bit of data that comes back from the spacecraft, and hope that something will be found that warrants Pluto’s reclassification, with an invitation back into the original nine. This is an incredible feat. Thank you, NASA.