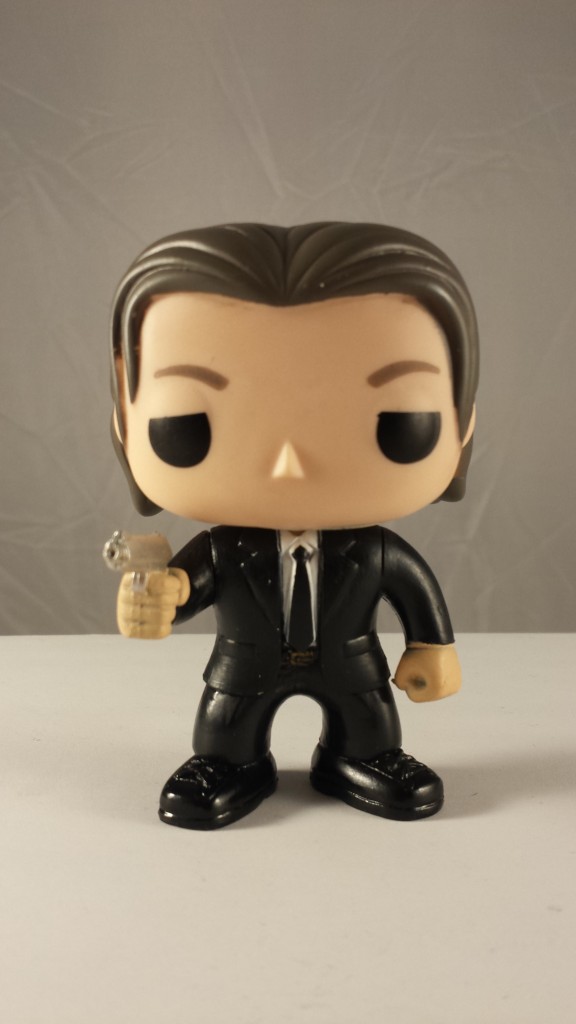 This week in my ongoing toy series, Funko Friday, the Pop! doll created in the likeness of Vincent Vega from Pulp Fiction will be featured. Pulp Fiction is one of my absolute favorite movies, and is also one of the greatest films of all time (that’s a solid fact). I won’t explain much about Quentin Tarantino’s masterpiece here, as even watching it for the first time can be at least mildly confusing due to the fact that the storyline jumps around in time. Vincent Vega is played by John Travolta in the movie, in one of his most memorable roles. The character is a hired gun for one Mr. Marcellus Wallace, and is put through the ringer with his partner Jules (Samuel L. Jackson, in an even more memorable role) before the end of the film.

He relates the strange things about Europe after his extended stay there, such as the ability to buy beer in a movie theater, and that French fries are typically drowned in mayonnaise. He narrowly escapes death in one scene and then dismisses Jules’ insistence that it was a miracle, takes Marcellus’ wife Mia (Uma Thurman) out for dinner, wins a dance contest with her (in what is quite possibly the most recognizable dance scene ever put on film) and then must drive an adrenaline shot into her heart after she overdoses on heroin, and accidentally blows another character’s brains out inside of a moving car. “Oh man, I shot Marvin in the face!” he exclaims, in a rather matter-of-fact tone.

In the picture above, you see Vincent, shrunken down to just under 4 inches tall, with his slicked-back hair, trademark black suit and thin black tie, holding out a gun, just as he does in the scene in which he and Jules pump poor Brett full of bullets for screwing over his business partner, Marcellus Wallace. Funko released a series of Pop! dolls for the movie, also including Mia Wallace, Jules, and Jimmie (played by Tarantino himself). On another note, if you haven’t seen Pulp Fiction, please stop reading this and go watch it. Right now. Run, don’t walk. If you don’t get it the first time, watch it again. And again. You won’t be sorry. Come back next week for another episode of Funko Friday, and another presentation of these lovable collectibles!