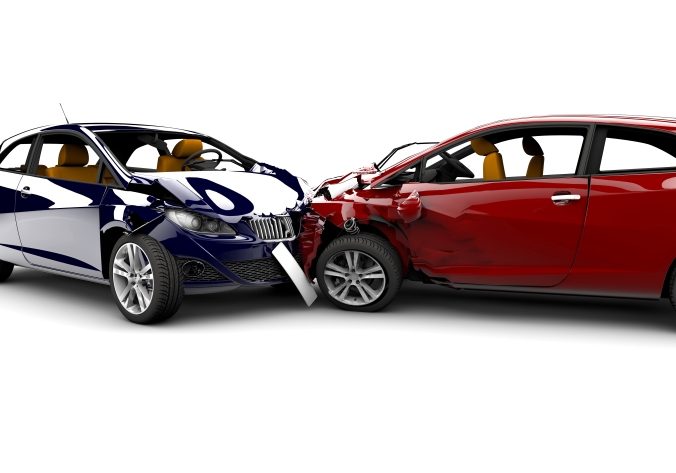 I can still feel the impact. I can still taste the powder from the airbag in my mouth. I can still recall sitting there for a moment, stunned, watching the bright green coolant pour out from the underside of my newly-mangled Chevy Cavalier, and out into the middle of the intersection. I still remember throwing my hands up and admitting guilt to the police once they got there, which is something I was later told you should never do, even if it’s true.

Seven years ago this week, I narrowly escaped a collision that could have ended my life, or someone else’s, or that at the very least could have changed either or both forever. It was a beautiful, sunny afternoon on Labor Day Weekend, and I was travelling from work to see my girlfriend at the time, at her new apartment. I hadn’t seen the place yet, and that night, I never made it inside. I was driving straight into the sun, and as I began to turn left onto the street where the apartment complex was located, and older man in a silver drop-top sports car heading in the opposite direction disappeared into the glare and slammed into me. Without stopping, or even slowing down, he had whipped out from behind another car in a turning lane, and hit me at just enough of an angle to send me spinning.

“You’re a moron!”, he shouted at me, once I came to my senses and got out of my car. All I wanted was to make sure everyone was alive and unharmed. I luckily didn’t have so much as a scratch or bruise on me, but already knowing the accident was my fault anyway I sliced it, I wasn’t very much concerned about my own physical well-being. The other driver had at least one other passenger with him, a woman as far as I could see. The fact that he had immediately launched into a screaming tirade led me to believe that everyone was intact. Amidst all the shouting he was doing, I caught something about how I destroyed his “pride and joy” and his “baby”. That seemed to be all he was really concerned about. When the paramedics arrived, I saw them put a neck brace on the woman, and my stomach promptly jumped up into my throat. Everyone turned out to be fine, as far as I knew. My parents came and picked me up, and brought me to a barbecue that they were heading to. I barely slept that night.

The aftermath was surreal. I got thrown off of my parents’ car insurance policy. I had to appear in court, and again admit my fault in front of a judge. Thankfully, my ticket for careless driving was reduced to “unsafe operation”. I still had to pay somewhere in the neighborhood of $400 to essentially buy the points off of my license. Desperate for a car, I used to money from the insurance settlement to buy a 10-year-old Volkswagen Jetta from a shady backlot used car dealer, from a listing that I saw in the classifieds. That became a tremendous problem over the course of the year that I drove it.

Less than a week after the accident, I was attending an awards ceremony for work, at which I was nominated for recognition in my department. Shortly before the ceremony kicked off, I received a phone call from my girlfriend, who was in hysterics. Through the histrionics, she told me that she had just gotten into a car accident, but only after several minutes of high-pitched screeching and crying did she compose herself enough to tell me where she was. She asked me to come to her, and I replied that “I couldn’t just leave” the ceremony that I was at. I fully realize how selfish and insensitive that response seems on the surface, but if you knew some of the things she said to me just a couple weeks later, you’d know I made the right decision. Our relationship was only weeks old at that point, and she was regularly judging and criticizing my station in life, as well as my perceived lack of ambition. In that moment, I began thinking of my exit strategy. I was only 24 years old, and I was in no real rush to “grow up”, whatever that means. Maybe a week or two later, tired of having a second mother, I told her that my heart and head were no longer in the relationship. She fought what I was saying, and basically refused to let me break up with her. This was fairly new territory for me, as I was always the one to be dumped. Days after that, with not a word spoken between us in the meantime, she ended what I thought I already had through a barrage of strongly-worded text messages. I finished washing my “new” car, called up a friend of mine, and went out to Surf Taco to celebrate my newfound freedom. And that was that. Two car crashes in the space of a week was a terrible omen.

To this day, I count my lucky stars that I am still here, and that I didn’t get anyone killed on that fateful afternoon. When I happen to pass through that intersection in my travels, my heart instinctively starts pounding, as if to warn me of some impending danger. A flash of memories crosses my mind, as well as a fleeting thought of her, the second bullet I managed to dodge. I still think about it. If that other driver wasn’t driving as fast as he was (I still maintain that he was driving entirely too fast), would we have missed each other? If I had left work just a few seconds earlier or later, or gotten caught at another stoplight along the way, would this have been avoided? If the sun wasn’t directly in my face when I made the turn, would I have seen him in time to slam on my brakes or swerve out of the way? What if someone had gotten killed? Would I have gone to jail? Would my life be destroyed forever? Would I ever be able to forgive myself for what was still just an accident? These are all questions that remain unanswered, and all I can think about is how lucky I am that it turned out the way it did. Cars can be fixed. Broken lives are not as easy to repair.