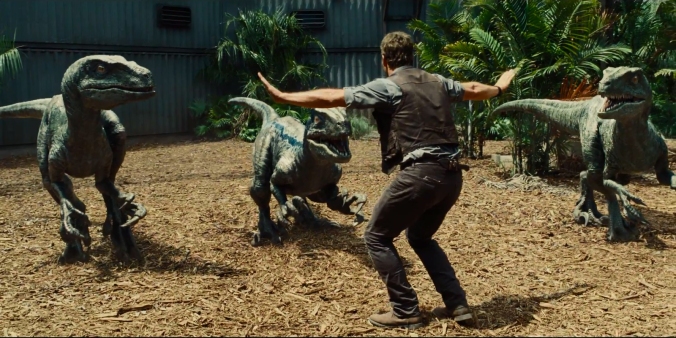 Twenty-two years after Jurassic Park was released, and after two disappointing and arguably unnecessary sequels, Jurassic World came roaring into theaters. That roar was a loud one, as this summer’s blockbuster raked in a whopping $208 million on its opening weekend, surpassing The Avengers (2012) for the biggest opening of all-time. More than two decades after the theme park on Isla Nublar, which was meant to dazzle tourists with close-up views of real-life dinosaurs, closed due to unforeseen tragedy, a new one was built right in its place. It seems that humans never learn. While the original Jurassic  films were adventurous and fun (mostly the first one), they served as a commentary on mankind’s continuous and ill-advised attempts to harness and control nature.

In this latest installment, the brand new park features all new dinosaurs, manufactured in a lab with DNA extracted from insects preserved in fossilized amber, along with that from other existing creatures to fill in the gaps in the gene sequence. This time, however, scientists working for the company, led by Henry Wu (B.D. Wong of Jurassic Park and Law and Order: Special Victims Unit fame), have cooked up an all new dino, the likes of which has never been seen. The “indominus rex” as it is called, is part t-rex, and later it is revealed that is also comprised of a certain tree frog that is able to change its skin color for camouflage, as well as the ever-fearsome velociraptor. Since the first movie, I’ve harbored an admittedly irrational disdain for the raptor (seeing as they no longer actually exist), due to their insatiable appetites, extreme intelligence, and ability to open doors.

Our hero, Owen, comes into the story early on, as is played by none other than Chris Pratt. Known for his comedic chops on NBC’s Parks and Recreation, and for his hilarious turn as Starlord in Marvel’s monster hit Guardians of the Galaxy, Pratt’s star power is currently exploding. Already set for another Guardians film and several others for the Marvel Cinematic Universe, Pratt is primed to become one of the biggest movie stars in the world. He provides some comic relief throughout this film, but mostly keeps his game face on as he tries to save as many lives as possible during another somehow unforeseen dinosaur outbreak in the park. The film utilizes a very cool concept in that Owen has found a way to train a small group of velociraptors to obey commands. While those creatures, named Charlie, Delta, Echo and Blue, are able to be calmed by their alpha, Owen, they are still volatile and dangerous. Hoskins, of the InGen genetic company responsible for recreation of dinosaurs, and played by Vincent D’Onofrio (of Law and Order: Criminal Intent brilliance), catches wind of the raptors’ ability to be trained, and wishes to militarize them for use in battle against foreign enemies (a proposition which does not sit well with Owen). His greedy and nefarious ways bring him to his end later in the film, which was quite predictable.

The story’s eventual heroine, Bryce Dallas Howard’s Claire, is cold and detached as a park executive who is obsessed with her work. She finds herself in trouble when she forgets that there are actual human beings behind the statistics and numbers that she analyzes, and furthermore when she fails at her responsibility of taking care of her two young nephews who are touring the park when all hell breaks loose. While some reviewers have claimed that Claire is gentrified by the script, dressed up and high-heeled for most of the story, her inner badass comes out when with a high-powered rifle, she triple-taps a pterodactyl that is attempting to tear Owen to shreds, and leads the tyrannosaurus rex out of its cage with nothing but a flare and her courage, for it to battle the terrifying indominus near the end of the movie. Howard, known for her portrayal of a very racist housewife in the critically-acclaimed The Help, and for being the daughter of legendary director Ron Howard, manages a convincing redemption for Claire, as the in-park crisis forces her to remember what really matters in this world and helps her regain some humanity.

Since the indominus spends much of the movie murdering other dinosaurs (and humans) merely for sport, Owen reluctantly leads his velociraptors out to take the creature down once and for all. One of the highlights of the film is an exciting scene in which the foursome rushes through the woods alongside their alpha, who is riding a motorcycle, towards their vicious target. A twist occurs when the raptors finally encounter the indominus, as the murderous creature begins communicating with them, and temporarily turning them against Owen and the rest of the search party (at which point Owen realizes that the genetic abomination is part raptor).

An interesting fan theory has emerged that the young boy in the original Jurassic who scoffs at the deadly nature of the velociraptor, and subsequently has the shit scared out of him by Dr. Grant (Sam Neill), actually grows up to be Owen’s character. Whit Hertford, the actor who played the young boy in that film, has publicly denied this speculation, but it is still arguably open to interpretation (at least according to Colin Trevorrow, World’s director). The plot is left open for at least one sequel, as Wu manages to escape the island with dinosaur embryos in tow. The movie is exciting through and through, with dazzling visual effects, in-your-face action, and a nice nod to the original film, as Claire’s nephews manage to stumble upon the ruins of the old park.

The only real disappointment for me is the absence of at least a cameo by Jeff Goldblum, who played the snarky InGen advisor Dr. Ian Malcolm in the first three films. I would have loved for just a momentary chase scene in which he utters the words “must go faster”. However, I will dry my tears on the fact that Goldblum is confirmed for the upcoming Independence Day sequel, for which I am eagerly waiting. Jurassic World is a landmark film, achieving gleeful reactions from fans of the original films, as well as the biggest opening weekend ever, both domestically and worldwide. The movie was everything a summer blockbuster should be, and the world is grateful.