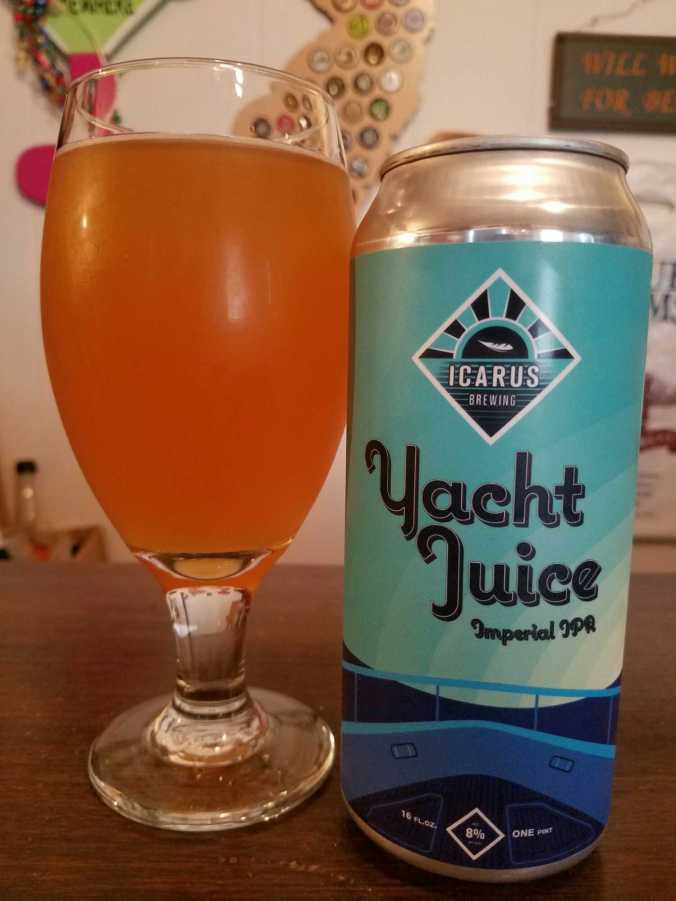 Lakewood, New Jersey’s Icarus Brewing Company is barreling through its first year of operation, pumping out a larger variety of beers than many of its local counterparts. Icarus builds its foundation upon diversity and balance, and much of its success so far is a direct result of its ability to brew something for beer lovers of all palates. The current state of the craft beer world dictates that breweries get into the IPA game, and my former hometown’s Icarus Brewing has acquitted itself nicely to that end.

Just about every shade of the India Pale Ale, a generally hop-forward brand of beer, has been produced by Icarus in its first eight months of existence, and that brings us to this review of my favorite such brew they’ve released thus far, the Yacht Juice Imperial IPA. This version of the New England-style IPA, is aptly titled – from the nautical imagery, to the slightly hazy coloring, to the balance between its considerable hop profile and fruit medley – and paints for the drinker a pretty picture of what they’re about to enjoy.

Yacht Juice, which was the brewery’s second foray into canning for distribution (behind its initial release of the delicious Ella Ella IPA), is dry-hopped to high heaven with a killer lineup of Citra, Mosaic and Columbus hops. The beer pours an opaque orange color, with a thin head that dissipates quickly to reveal the juiciness beneath. On the olfactory end, Yacht Juice prances through a field of tropical and citrus fruits, much of which is left to the drinker to discern with a deep sniff or two. Where things really get heavy is on the sip, where the tastebuds get treated to the flavors of grapefruit, melon, orange, and maybe even a bit of kiwi on the tip of the tongue, while the trio of hops hit the back, letting you know it’s still an IPA. There’s an expert level of balance here, which is satisfying, because let’s face it – the awfully bitter, palate-destroying IPA is out. The people have spoken – they want “juice bombs,” and that’s just what we have here.

This fantastic IPA clocks in at 8% on the ABV scale, which is difficult to realize, because of its sweet, easy-drinking nature. Almost like a session beer in its drinkability, but it carries an alcohol level that disqualifies it as such. This characteristic makes Yacht Juice sneaky, its juicy, unsuspecting flavor profile belies its strength.

Yacht Juice is available in 16-ounce cans at the brewery (while supplies last), which is located in Lakewood’s industrial park, as well as in local liquor stores, and may even be found on tap at some of the brewery’s burgeoning list of bar and restaurant accounts. Raise your sails and hit the open seas with Yacht Juice wherever the fair winds bring it your way. Follow Icarus Brewing Company on Facebook, Instagram and their website for updates on what’s coming up next! Cheers!