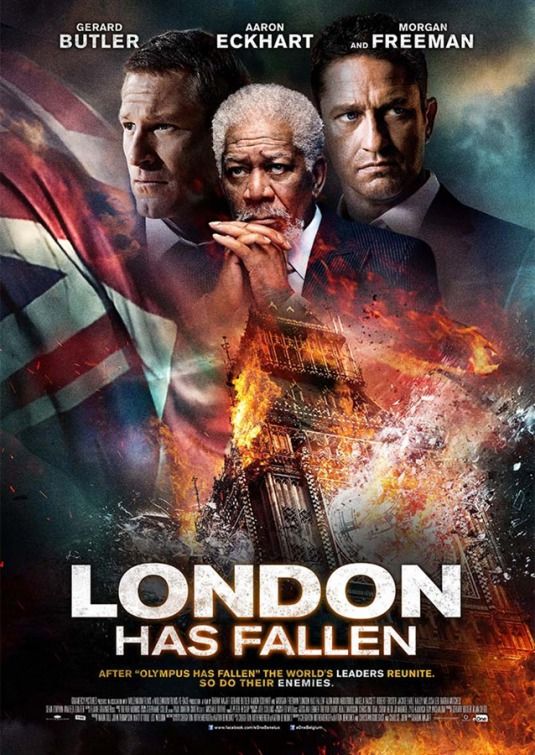 Welcome to the first edition of “Mini Movie Reviews” at The No Seatbelt Blog! I love movies more than most things in life, and when I write about them, I tend to be longwinded. I’m starting this series to present small, digestible reviews of movies that I enjoyed, but on which I don’t feel the need to compose a novel. I’m kicking the series off with London Has Fallen, the sequel to Olympus Has Fallen, which was one of two 2013 flicks that revolved around a terrorist attack on The White House (the other being White House Down).

Released this March, London Has Fallen sees the return of Mike Banning (Gerard Butler), the Secret Service agent and lone wolf who protected President Benjamin Asher (Aaron Eckhart) when in the most likely scenario, a terrorist mastermind and his band of not-so-merrymakers managed to invade The White House and hold the President hostage. This time, Banning finds himself ready to give up his post as he has a child on the way, but decides to accompany President Asher one last time on a trip to London, as the world’s leaders gather to mourn the rather mysterious death of Great Britain’s Prime Minister. A group of Middle Eastern terrorists, angry over an American drone strike that killed innocents, finds this the perfect time and place to take out Asher, other heads of nations, and well, as many other people as possible.

Of course, they didn’t count on Banning’s presence, and that’s bad news for them since the man is just flat-out invincible. Banning leads Asher through London, escaping certain death at every turn as the city falls down around them. Matching the silly, over-the-top violence of its predecessor, London Has Fallen is loaded with improbable, even impossible scenarios, and a body count that will turn your stomach, but goddamn, is it fun. I’m sure you can guess that there’s room for a third movie, which means that these films are becoming Butler’s own personal Die Hard series, and I’m more than cool with that. As long as he keeps making movies about things falling, I’m in. Also, Morgan Freeman is back for the ride on this one, and let’s face it, everything he touches turns to gold. Packed to the gills with more gunfire and explosions than you can shake a stick at, as well as that obnoxious American spirit that the rest of the world loves to hate, London simply takes its origins to a new location, and keeps the old adage “if it ain’t broke, don’t fix it” alive and well. Turn your brain off and watch the guy who still doesn’t even have to bother trying to mask his Scottish accent, even when he’s playing an American, kick some terrorist ass.