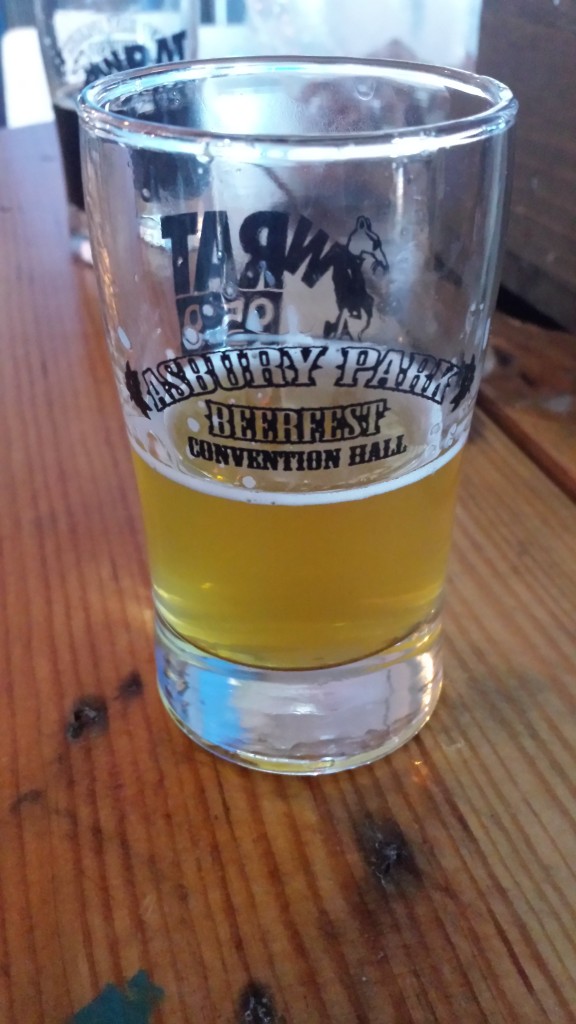 Last Saturday, I made my way to Asbury Park, New Jersey, with a belly full of delicious pork roll and pretzel necklace draped around my neck to partake in the much-anticipated flow of suds at the city’s annual Beerfest. Convention Hall was the place, situated at one end of the town’s famed boardwalk, hosting taps and bottles from over 40 breweries from around the country.

The four-hour session began at noon, and having arrived early I got right in, along with my fiance Jenn and a group of her friends. A quickly-developed plan of attack led us to the concert hall’s stage right away, where New Jersey’s own Flying Fish and Forgotten Boardwalk had set up shop. Forgotten Boardwalk, from Cherry Hill, won the popular vote at last’s years fest for their “Funnel Cake” brew, which is sweet and quite good, but tastes nothing like actual funnel cake. I sampled the brew once again, and it holds up. Highlights for me from Flying Fish were their Abbey Dubbel, a Belgian ale that is fruity and warm, and almost seems more like a wine than a beer, and their Grand Cru Winter Reserve, another Belgian-style ale that offers the taste of clove, malt, fruits and hops.

Just to the right in the main concert hall area was Great South Bay, which I had never heard of, and they offered a blood orange pale ale that kept their line fairly long for most of the day, and for good reason. New Belgium, which resides in Colorado, had a table set up, but unfortunately came with no beer. The brewery, which is responsible for the excellent Fat Tire, made up for the lack of physical beer with the news that distribution will soon happen in New Jersey! For any fans of New Belgium around here that can’t get any of their beers, this is very exciting news. 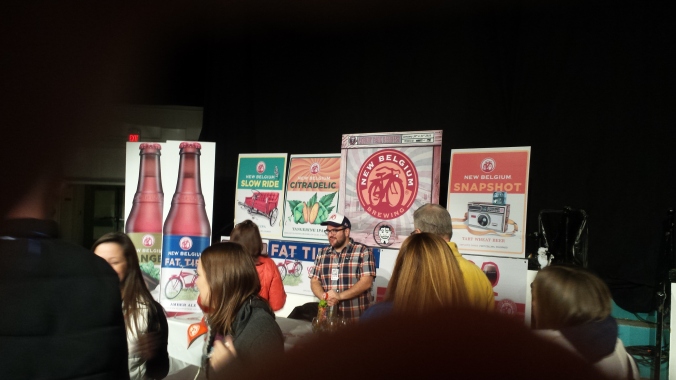 New York’s Ommegang Brewery, which churned out the limited-edition Game of Thrones beers, was also present. On tap, they had Hennepin, which packed the tried-and-true coriander and orange peel one-two punch. Newcomer Belford Brewing, from the Belford section of Middletown, NJ served up the Honey Hudson, a honey ale that was milky, had no transparency, and was one of my favorites from the whole day. Perhaps the most important beer of the day, however, came from Sam Adams, when they pulled the ace from out of their sleeve and announced on stage that they would be sampling their fabled and elusive Utopias, a beer that rocks a 28% alcohol-by-volume and tastes more like a fine cognac than a beer. This brew which uses remnants from previous ones, for years on end, runs for upwards for $150 a bottle and is nearly impossible to find. I had to try it so I jumped right on line and got a sip. Powerful, potent, and without much, if any carbonation went Utopias. I had long heard about this beer, and it seemed almost mythical in stature. 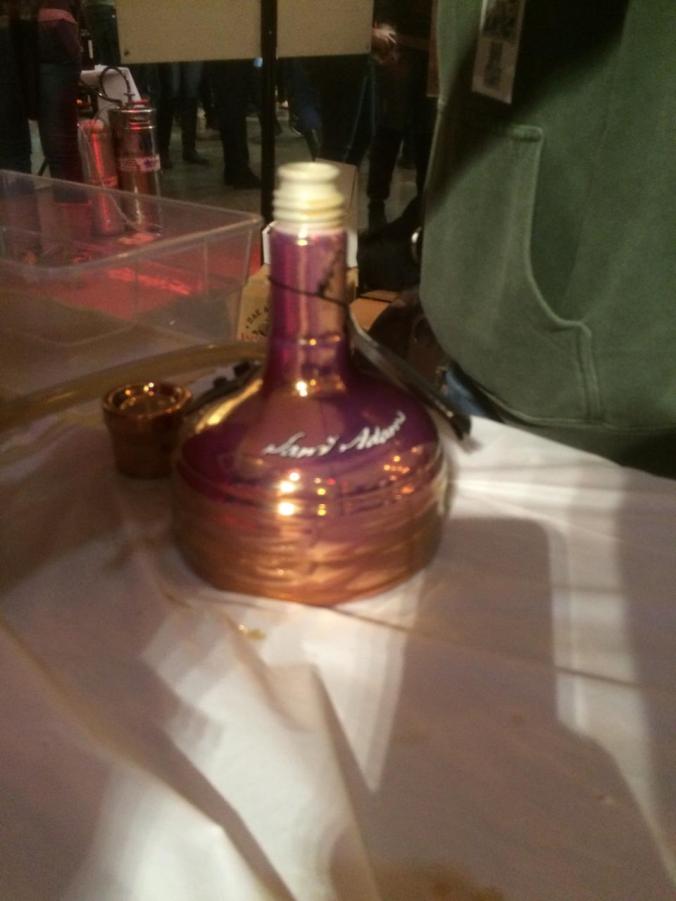 Also on tap at the Sam Adams booth was a grapefruit version of their Rebel IPA, which which wasn’t very forthcoming with the grapefruit taste, and a white ale infused with nitrogen (as they join that conga line). While this was all going on, Jimmy Steele from local rock radio station 95.9 The Rat hosted the day from the stage, playing some music, making announcements and presiding over contests. One of those contests was the beer mug holding contest, in which volunteers get up on stage and hold a beer stein full of water and not beer straight out, for as long as they are able, without bending their elbows. The fact that there was no beer in these mugs took something out of it for me, but it was fun to watch. 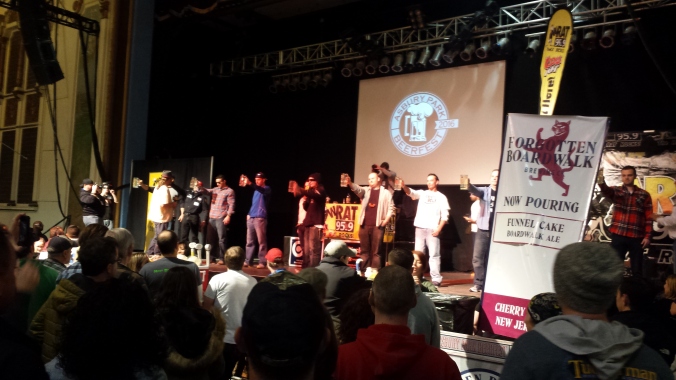 Brooklyn Brewery, which offers some very respectable go-tos, was also in attendance, offering their Insulated Dark Lager, which we were told by the brewery’s barman would be replacing their Winter Lager in the lineup. Evil Genius was a highlight for me as well. The brewery is known for dubbing their beers with hilarious names, which are usually pop culture references, and those names alone draw you in. On this day, they had on tap Stacy’s Mom, which was a citrusy India Pale Ale, which was low on the bitterness scale and quite enjoyable. Aside from that, they had Purple Monkey Dishwasher, which was a delicious chocolate peanut butter porter. Brewer’s Apprentice, a brewery in Freehold, NJ, which allows patrons to come in and pay to partake in the brewing process, choosing which style of beer they would like to brew, and then take that beer home, was also in attendance. I have brewed there several times with beer-loving friends, but alas, I never made it to their table at the Beerfest.

The in-house bar had Harpoon’s UFO White Ale flowing from the tap, which I love, and went back for seconds. Dark City, a new brewery in Asbury Park, which much to the chagrin of attendees at last year’s festival showed up without beer, were all set up for business this time around. I tried two different brews at their stand – City Limits, an American pale ale, which is said to invoke the taste of a fruit cup (which I didn’t get) and Charrette, a rye-style IPA which was not overly-bitter. Both were quite decent. Boston-area brewery Clown Shoes had a summery clementine witbier that was right up my alley. 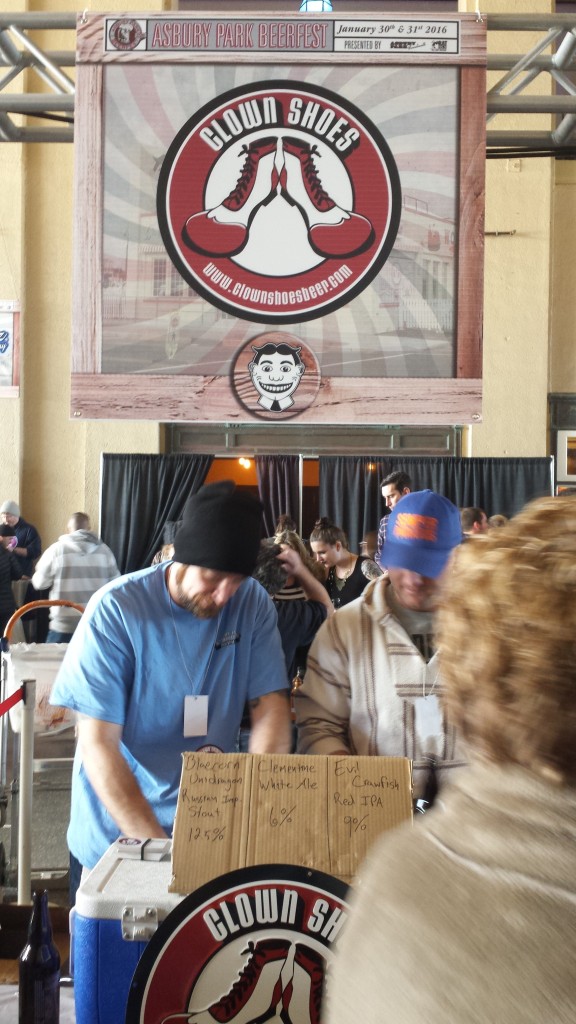 That about does it for my first experience at Asbury Park’s Beerfest. I hope you’ve enjoyed my journey through the event, and got some ideas for beers you’d like to find and try. I will definitely be attending this one again – it was a blast. To all you out there in Beerland, drink up!