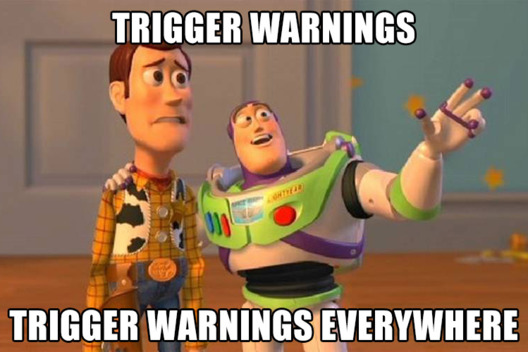 Once upon a time, the college campus was the last bastion of progressivism – a place where new and unique ideas that threatened to break any given status quo were shared, challenged and often put into action. As the new millennium progresses, however, that former haven for free speech and the development of ideas is suddenly regressing, as a new generation of students seeks to shut down any words or ideas that they deem to be offensive, scary, or simply against their own opinions. A new phenomenon has descended upon higher education institutions in the United States, and it takes the form of “trigger warnings” and “safe zones.” The former, which is defined as any words or ideas that may trigger a negative reaction in students who have been victims of some traumatic experience, are forcing professors to cut significant portions of their material out of the curriculum so as to not offend any of their students. The latter, which are predetermined locations on campus where students can go to decompress after encountering a scary idea in class, is a laughable solution that continues to coddle oversensitive students, encouraging them to run away rather than face and challenge opinions with which they do not agree. This use of “kid gloves” is a problem on several levels – it threatens the integrity of a well-rounded education for both professors and students, it is an absurd affront to freedom of speech, and it teaches people who have been coddled their whole lives, from childhood on up, that they have an inalienable right to not be offended. The concept of realism dictates that this mentality has gone too far to protect the few from being traumatized by the ideas of the many.

Freedom of speech is one of the most fundamentally sacred rights that are held by American citizens. While it is understandably limited to exclude purposeful hate speech and terroristic threats, it is meant to create an open forum for the exchange of ideas. The fact that this freedom is being stripped away on college campuses by a student population that once thrived on it is far scarier than any of the ideas that come under protest. Bettina Aptheker, who is one of the leaders of the Berkeley Free Speech Movement, takes a reasonable approach to the topic, relating that “as abhorrent as some speech is, and I certainly think [some] is, the administration of a university should not be in the position of policing it, because it’s a very slippery slope” (Milligan). Former Secretary of State Condoleeza Rice was invited to give the commencement speech at Rutgers University in the spring of 2014, but ultimately declined the invitation after heated protests from the student body because of their opinions concerning her involvement in the war in Iraq. The school’s president, Robert Barchi, defended the invitation, insisting that it was “important for Rutgers to protect free speech and academic freedom” (Fitzsimmons). There is a practiced hypocrisy on the part of the protesting population in this incident, as they exercised their own right to voice opinions, but in selfish and narcissistic fashion deprived Rice of that same right, whose experience, encouragement and well-wishes on that day would not have been without their merit. Christina H. Sommers, a former philosophy professor and active feminist, experienced a volatile reaction from students as a guest speaker at both Georgetown University and Oberlin College, due to her beliefs that there is no such thing as “rape culture” on college campuses, and that women can close the wage gap by choosing more specialized and competitive majors while in school. Students at the latter were so hostile to her presence that officials at the college deemed that there was a “credible threat to [her] safety, and provided her with an escort” (Bohkari). One must recognize and appreciate the irony in this situation, in which students who are responsible for the creation of “safe spaces,” where they can hide from opinions that are not their own, made someone feel physically unsafe because of their contradictory expression of thought.

The issue with students running away from unfavorable ideas – particularly in college, when a student’s ability to be influenced and develop informed opinions about the world is at a frenetic high – is that such evasion makes the education process incredibly difficult for teachers, and provides for a rude awakening later in life. As the concept of the “trigger warning” has cropped up on campuses around the country, the college classroom has become a haven for mental and emotional safety, rather a place where intellectual boundaries are pushed. Rutgers University provides another example of this mania, with a student’s proposed flagging of The Great Gatsby, due to its inclusion of a “variety of scenes that reference gory, abusive and misogynistic violence” that might trigger negative emotions in students who have endured such trauma (Wythe). It is not to say that the experiences of people who have endured combat, sexual abuse or other horrific situations should be dismissed, but the educational system suffers when students are allowed to avoid certain course material because it might upset them. Furthermore, for a professor to have to scan all material to find passages that might invoke unfavorable emotions in some students is tedious, time-consuming, and results in a flailing attempt to determine who might be offended by what. However, should students have to endure further trauma by reading and discussing literature that contains gritty subject matter have a place to go on many campuses to recharge. At Brown University, for example, students who had to face opinions from others in class that clashed with their own can escape to a “safe space” – a “room quipped with cookies, coloring books, bubbles, Play-Doh, calming music, pillows, blankets, and a video of frolicking puppies, as well as students and staff members trained to deal with trauma” (Shulevitz). Granted, such a room sounds like a perfect place to de-stress between finals, but its actual intent encourages flight from disagreement, from the classroom, and from a full education.

This abject inability to face down challenges and opposing viewpoints, of course, does not start during freshman year of college. Even before the turn of the new century, parenting techniques began to evolve, turning in a frightening direction. Intensive parenting, as it is called, requires the fanatical overprotection of children. Modern parents douse their children with hand sanitizer, repeatedly ensure them that they are more special and entitled to success than anyone else, and shield them from the negative realities of the world. This tight hold on the reins of children has a profoundly negative effect on them once they reach adulthood, as “children are cossetted by intensive parenting that encourages passivity and dependence, and stunts their abilities to improvise, adapt and weigh risks” (Will). This is a damning reality, because while nobody truly likes to fail, it is important for parents to let their children do just that, lest an entire generation grow up to find that the world at large will not cater to a fragile self-esteem. According to David Rock, the director of the NeuroLeadership Institute, “it may be that we have failed a whole generation of children by telling them how special and great they are, and coddling them from doing anything too difficult or dangerous. We’ve done this because psychologists have told us that self-esteem is important” (Rock). While self-esteem is a human condition that will never be eradicated, it needs to be molded in such a way that failure, at least some of the time, is perfectly acceptable.  It is high time for parents to let their children play in the dirt, both literally and figuratively, for a strong immune system and a thicker skin will help them out immensely in life.

As this troubling regression has taken root on college campuses in every corner of the nation, it is crucial to begin turning the tide, and return those institutions to their former status quo. Gone need to be these new days, during which students are taught to run and hide from thoughts that are not aligned with their own, or are allowed to shout down those ideas and the people that offer them in the name of “safety.” Such a change, however, needs to be made from the bottom up, meaning that parents would do best to start letting their children off the leash, just a bit. Working through life may indeed prove to be easier when it is understood that there is such a thing as winning and losing, and that in adulthood, trophies are not handed out just for existing. Children will undoubtedly be more successful in life when they are taught the difference between right and wrong, but are allowed to experience it all and stand up to the ugliness of the world. While some amount of sympathy is in order for people who have experienced various traumas, those people need to understand that the entire world cannot always tip-toe around sensitive issues, being forced to always assume that someone in the vicinity may be triggered by discussions that need to be had for the betterment of society. Freedom of speech must endure, as must those places where ideas are introduced, debated, and allowed to live or die on their own merits, rather than being quieted before they are uttered allowed. Avoidance and intolerance of conflicting ideologies is not the answer to dealing with the ills of the world – they must be addressed in order to maintain any hope of curing them.

Rock, David. “Has Coddling an Entire Generation of Children Set Them Up For Failure?” Huffington Post. Web. 7 June 2010. Updated. 17 November 2011.