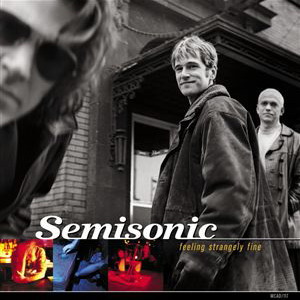 From Feeling Strangely Fine, the same album that brought you “Closing Time,” your favorite “last song at the bar” (yes, even above “Don’t Stop Believin'” or “Livin’ On a Prayer”) comes “Singing In My Sleep”, the other great Semisonic song that few too many people know.

Lead singer Dan Wilson’s lyrics are whimsical in the song about falling in love through a mixtape, as he throws in lines such as “singing up to a Capulet on a balcony in your mind,” and “in the city the lion sleeps, pray to Sony my soul to keep.” Back in the 90’s, people told each other how they felt through carefully-crafted music mixes, filled with handpicked songs that pinpointed all the feelings during that first meeting, the ensuing butterflies, and the moment they fell.

This song brings me back to that time, to when I couldn’t find the words, but a dozen songs could be sent to speak in their stead. The song’s chorus is repetitive, consisting only of the line “I can hear you singing to me in my sleep,” but the band found a way to make it catchy. Unique lyrics, a catchy chorus and a song about the lost art of telling someone how you feel about them with music that’s not yours makes this tune unforgettable to me.

What’s also unforgettable to me (if I remember this correctly) is that time way back when the MTV Beach House was located in Seaside, New Jersey, making the town even more of a tourist attraction. One day, Dan Wilson was a guest host on the network, and the producers sent him out onto the beach to ask random people one simple question- “how do you like me now?” It was a hilariously awkward bit, but Wilson clearly had a sense of humor about it, and it stuck in my mind ever since.

The music video for the song from the band’s 1998 album can be found below. Check out this fun and catchy song from a bygone time now!