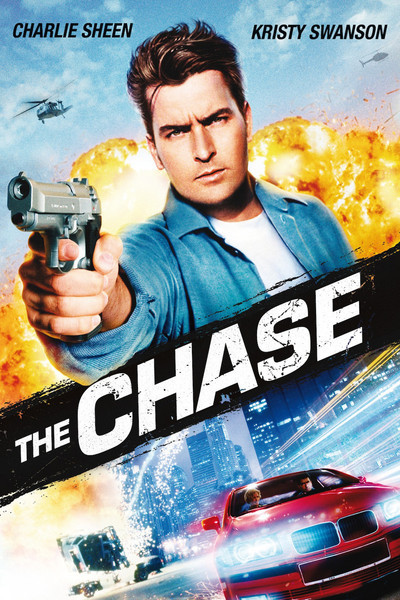 Take a trip back with me to 1994, a time when Charlie Sheen was young, sane, and likable. In The Chase, Sheen plays Jack Hammond, an escaped convict who in a moment of desperation is forced to kidnap the daughter of California’s wealthiest real estate mogul, and lead the Newport Beach police on a high-speed chase as he heads toward Mexico. He stops at a convenience store for gas (to put into the stolen car he’s driving) and cigarettes, and when confronted by two officers, he takes one Miss Natalie Voss (Kristy Swanson) hostage by “candypoint”, shoving a Butterfinger bar into her back, pretending that it’s a gun. He then takes Natalie, the only daughter of real estate tycoon Dalton Voss, to her shiny red BMW and heads for the border, with her in the passenger seat, and a gun cadged from one of the hapless cops who let him get away. Along the way, Jack dodges the police, relentless television news crews, explosions, cadavers dumping out of a swerving medical truck and out onto the highway, and pleas from his well-meaning lawyer to end the madness so that they can prove his innocence the right way. As he explains to Natalie at one point, he worked as a clown at kids’ birthday parties, and was wrongly arrested and convicted of several bank robberies that were actually carried out by another guy in a clown suit.

Hot on their tail the whole time is a cadre of police cars led by Officers Dobbs and Figus, (Henry Rollins and Josh Mostel, respectively) who have a film crew in the back seat of their cruiser, filming a “day in the life” documentary. Rollins’ overzealous performance is a highlight for me every time I watch the film, while Mostel is rather whiny. Dalton Voss (Ray Wise), dubbed “the Donald Trump of California”, is full of bluster, and you can quickly come to realize that while he cares about his daughter, he may care more about the publicity her kidnapping ordeal could bring him. As Jack and Natalie continue to evade the police, the two get to know each other, and she goes in the space of about an hour on film (or the better part of a day in actuality) from hating his guts to falling in love with him. She comes to believe that he is innocent, and that he was dealt a shitty hand in his 25-year sentence for crimes that he didn’t commit, and that he would never resort to stealing cars or kidnapping under normal circumstances. Before you know it, the two are having sex in the front seat of the car…while it’s still moving. Remember that psychiatrist in Die Hard that explained the concept of the Helsinki Syndrome (which is actually Stockholm Syndrome), a condition in which hostages begin to sympathize and empathize with their captors, and even bond and maintain relationships with them after their release? Yeah, amplify that by about a thousand and you get Natalie Voss in The Chase.

This is yet another wildly entertaining film that doesn’t take itself too seriously. The dialog is witty, there is no shortage of explosions for something that’s not strictly an action movie, and the main characters end up being quite likable. For a movie filmed almost entirely in Texas, The Chase certainly screams the Southern California in which it’s set. Watch out for cameos by Ron Jeremy as a cameraman, and by Anthony Kiedis and Flea from The Red Hot Chili Peppers as a pair of SoCal punks who are bent on getting their fifteen minutes of fame by going vigilante and running Jack and Natalie off the road in their monster truck. The Chase is pure fun, loaded with comedy, action, and satire, in its presentation of a number of overblown characters, and its mocking of news media and its tendency to blow everything out of proportion. Don’t think too hard about anything in this film and you’ll love it, and you’ll probably never look at a Butterfinger the same way again.