The first week of the 21-Day Fix has been interesting, to say the least. There are aspects of the diet plan that are not as bad as I thought they were going to be, but in other ways, it’s a trial of willpower that I’m not quite used to. I won’t be providing a daily journal here, as that would be tedious for me and likely boring for you, but I’ll give you an overall view of what I’ve gone through so far. There were some struggles (all of which were mental), some success, and some surprisingly good meals (some of which I’ll describe and provide pictures for). Perhaps the hardest part for me so far has been satisfying my raging sweet tooth, which I’ve had to do with fruit alone thus far. One of my favorite things in the world is gummies of all sorts, and up to this point, a bag of them came to work with me several times a week to get me through the day. Visions of Gummi Savers have been dancing relentlessly through my mind all week. I must say, though, the amount of fruit I’m allotted each day with this program has helped quell my formidable addiction to sugar. I almost forgot how much I love oranges, and grapes, which I know are not the healthiest of fruits, have been of great service.

On the upside, I’ve discovered that vegetables aren’t so bad, even though I’ve always been averse to most of them. Onions and peppers have been a recurring ingredient in the meals that Jenn and I have cooked up this week, and I never thought I’d see the day where I’d admit to almost liking them. Furthermore, you really don’t have to sacrifice taste to make a satisfying, healthy meal. There’s actually a lot of flavor in nature, and normally I went looking for the kind that was conjured up in a lab somewhere. We made an awesome “Grandma’s” tomato sauce, the type that your old Italian grandmother would simmer and stir in a pot for two days before you finally got to eat it. That was used as a topping for the tasty turkey meatballs that we made, and on our whole wheat tortilla pizzas, which also featured a bit of mozzarella and Parmesan cheeses, and onions and peppers that were sauteed in garlic. We’ve made a caprese salad, with fresh mozzarella, juicy tomatoes and basil pesto. One of our favorite meals (aside from the pizza) were the pineapple chicken skewers, which consisted of pineapple, onions, peppers, and chicken marinated in a soy sauce/sesame oil concoction. At first, I wasn’t sure how I’d feel about hot pineapple, but I love the fruit and it still tasted the same, char marks from the grill and all.

Each morning started with a Shakeology shake, which are not bad once you get used to them (they may taste a bit chalky at first). Our kit came with chocolate, vanilla and strawberry flavors, which get mixed into some unsweetened almond milk, and thrown into the old Nutribullet with some ice. We’ve also added banana, and peanut butter can be used, but with an extremely limited ration of healthy fats each day, that has not been deemed worth it as of yet. The shakes are filling, loaded with nutrients that you probably aren’t getting anywhere else, and are good to get you through until mid-morning. They can also be substituted as a snack.

So far, I have not noticed any significant change in the way that I feel on a physical level. I don’t feel more energized, but that could be due to the fact that Jenn and I are awoken at 5:30 just about every morning by our otherwise lovable puppy Stella, and that I sit at a desk for eight hours after that. I’m usually too tired to do much else when I get home, so I sit some more. That brings me to my next point- the exercise DVDs included with the program. I wouldn’t know anything about them, because we haven’t gone through any of them. We could throw every reason in the book at you for why we haven’t, from our early-riser of a puppy, to wacky schedules, to incredibly time-consuming meal prep, we’re thoroughly busy and exhausted most of the time. The program only calls for 30 minutes of exercise per day, so I’m sure if we manage to squeeze in at least a few decent workouts a week for the remainder of the diet, it will accelerate our weight loss. That considered, we lost six pounds each, which we think is a good start.

What was truly the most difficult individual challenge so far for me came on the final day of the first week. I picked up a second job at a pizzeria where I used to work, and having to stare at the amazing selection of pies out on the counter all day was brutal. And this place makes really, really good goddamn pizza. Aside from that, the distractions have been remarkably few, with perhaps the exception of the “Fiery Chicken Fries” sign at the Burger King around the corner from my house. That hurts a bit, too.

So, at the end of the first week, I’m down to 182.5 pounds. Jenn and I will be trying some new recipes, which I’ll share in the next update. Final physical measurements will be taken at the end, and I’ll post mine at that time. See you back here next week! 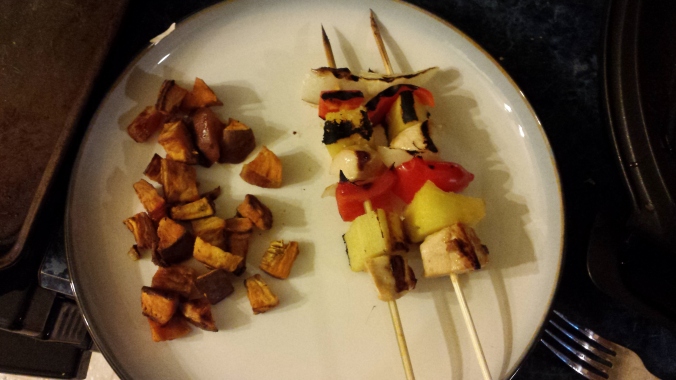 Tortilla pizza with onions and peppers