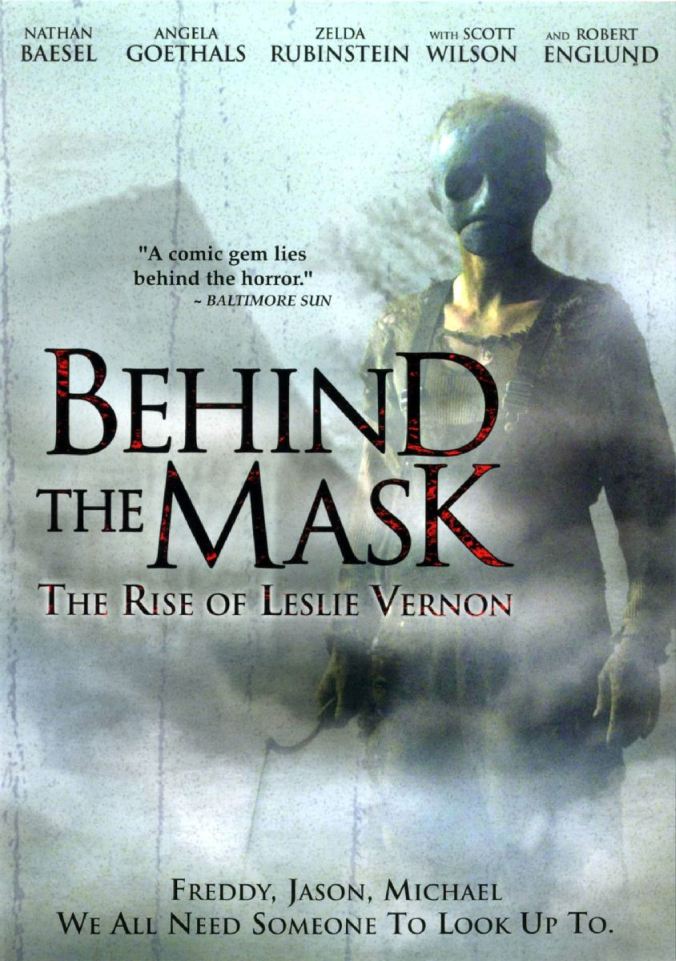 When it comes to horror movies, they are typically divided into two classes – the A-list classics, and the low-budget B-movies and remakes. In 2006, one movie created a class of its own. Behind The Mask: The Rise of Leslie Vernon brought with it a style and charm that is rarely seen in the genre, as the title character lets us into his world. The charming and disarmingly funny Leslie (Nathan Baesel) allows a budding journalist and her camera crew to interview him as he plans his ultimate slaughter. Operating in the shadows of the horror greats such as Jason Voorhees, Freddy Krueger, and Michael Myers, Vernon opens up to Taylor (Angela Goethals), about not why, but how he does what he does as a serial killer.

The film spends much of its runtime exploring, and often mocking the conventions and cliches of the horror genre, seemingly dying to break the fourth wall with its constant “winks”, but never fully doing so. The interview scenes are delightfully awkward and entertaining, as Taylor tries as she might to understand what’s behind Leslie’s drive to bring fear back to the small town of Glen Echo, Maryland, and even more so when she finds out that the legends of his horrifying childhood were fabricated. Leslie stalks his main target while he plans his bloodbath, explaining the well-trodden concept of the “survivor girl”, a young virgin who is meant to discover her inner strength and stand up to the killer at the end of the movie (one might think of Neve Campbell’s Sidney Prescott in the first Scream). In a good horror movie, nothing is what it seems, and Behind The Mask proves that well. Leslie is immediately likable, introducing Taylor to his pet turtles Church and Zoey upon first meeting, but makes it clear that he is very serious about his murderous mission. The “survivor girl” may not be who you think she is. Not every legendary killer is invincible or supernatural. We are reminded of this by the conversations had between Leslie and his mentor Eugene (played by a pre-Walking Dead Scott Wilson), which are laden with inside jokes and lamentations about the current state of the “business”. It is truly hilarious to hear Eugene refer to the legends as Fred, Mike, and Jay, as if they were old friends of his.

The icing on this funny and interesting cake is the casting of Robert Englund (Freddy Krueger himself), who portrays a psychiatrist who once treated Leslie in his youth and is trying to stop him before he strikes. Other fun cameos include that of Zelda Rubenstein (of Poltergeist fame), as a librarian who meets an early demise, and a brief one by Kane Hodder, who played Jason Voorhees in two of the later Friday the 13th films. Behind The Mask is one of the most unique and entertaining horror flicks I’ve ever seen, balancing a tongue-in-cheek reverence for the classics, and its own style and twists. I won’t give away what happens at the end, but stay through the credits for a bit of a shock! This one is a must-see for horror fans.