Originally published on 10/12/14 at The Nerd In The Box (thenerdinthebox.com)

I’ve been a fan of Nerf ever since I was a wee lad, and I’m still quite a wee lad at heart. One of my favorite weapons from their foam projectile arsenal has always been their bow and arrow. The first incarnation of this was released when I was a kid, and proved to be worth years of fun.

Pictured above, the first Nerf bow and arrow was simple to operate. All you had to do was pull back the yellow grip and let it go, much like you would do with the twine on an actual bow and arrow. The accuracy of your shot, once fired, would normally depend on how quickly you bent and destroyed the three blue stabilizing fins on the yellow missiles. If you were engaged in a close-quarters Nerf battle, like all Nerf battles are meant to be, this dart-slinger was no joke. The air-powered bow would make a loud whoosh and a pop as the missile sprung from its post, and if you were unlucky enough to catch one of these darts in the head or face at close range, IT HURT.

Through the years, Nerf’s ideas and designs began to evolve, along with technology, its line now filled with C and D-battery powered, semi-automatic and automatic monstrosities. You now have the ability to pelt your friends with endless rounds of chain-loaded darts by simply keeping your finger on the trigger. What a delightful nightmare. With this evolution, the next version of the bow and arrow, called the Big Bad Bow, brought with it a displeasing change. 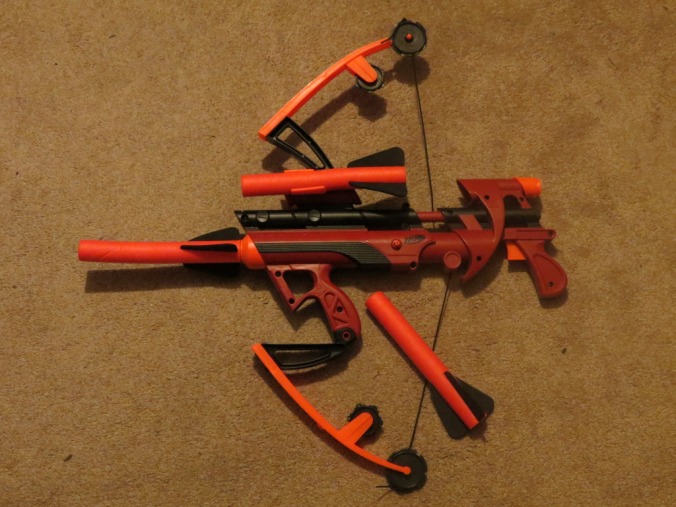 While much of the body design remained similar, the firing mechanism now contained a trigger. You would now have to pull back the handle and press the trigger, which would negated the traditional feel of pulling back the grip and letting go to fire a missile. Of course, I still bought this when it came out, since the thought of owning a Nerf bow and arrow again made me feel all warm and fuzzy inside. The bow is just as powerful as the original, with decent shot distance, and yes, headshots still hurt. The foam missiles remained just about identical in design, and have simply changed color.

More recently, the Nerf bow and arrow has undergone a complete makeover. 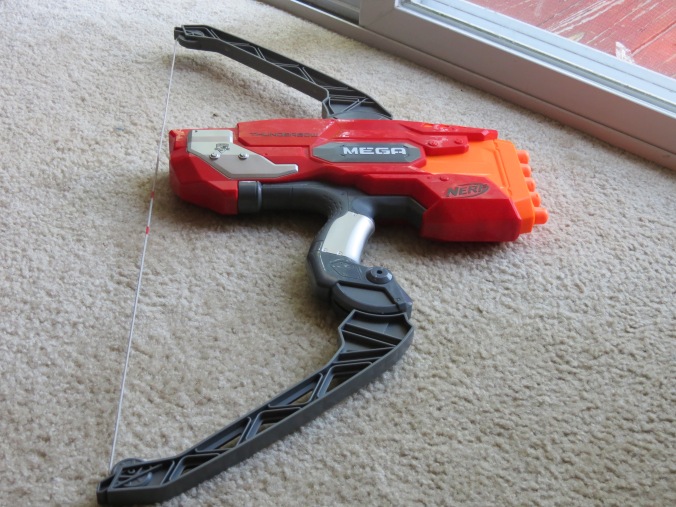 I’m 50/50 on the design on this one, which goes by the name of the Mega Thunder Bow. I LOVE that the firing mechanism is just a string, simulating an actual bow and arrow experience. However, the ammunition has been resigned to a cartridge of smaller, rubber-tipped darts, in lieu of the large foam missiles of old. While after a while, it became inevitable that you would bend and tear off the fins from the foam missiles, they more closely resembled arrows. The body of the new model is a bit more compact, which is a plus, and reloading is required less frequently. This model is also very powerful, and now that it uses rubber-tipped darts, watch your face.

To all you Nerf fans out there, I hope this brought back some memories, and gave you some insight into the design evolution of this archer’s delight. Until next time, see you in battle.